When I released the latest refreshed version of this web in February, I promised myself to write more often… and yes, I know, it seems that I lied… it’s been a while since last post! But the truth is that I’ve been busy writing and learning new stuff. Among them, I learnt some SWIFT, the new programming language of Apple.

An because I primarily learn by doing, I made an iOS app: Open GPX Tracker. 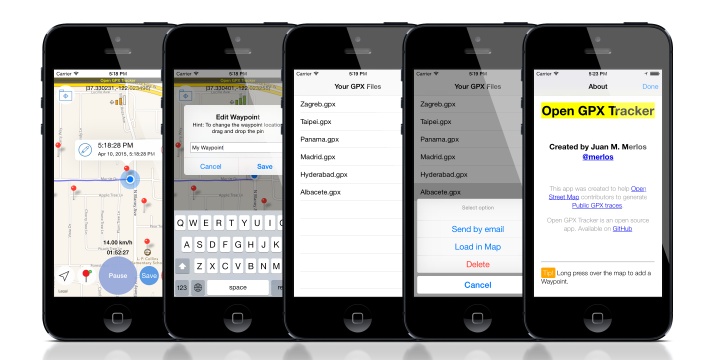 Open GPX Tracker is a GPS tracker works on all iOS devices (iPhone, iPad, iPod…). The app tracks your device GPS location and draws the the “line” of your path. Then, you can save it and then export it to GPX, a file format that is widely used in many other apps. You can also add waypoints on the map and name them. To run it, you need iOS 7.0 or above.

This app, although is pretty simple, has a couple cool features:

Why did you make this app?

I made it for these reasons:

Although, I started this project on October 2014, it has not been till this April when I felt the UI it was ready for being published. I’ve used the app a few times in real scenarios and I’m pretty happy with the user interface, and far from being perfect it’s very simple.

Is it available on the App Store?

Update 1st May: The app has been approved by Apple and now it’s available on the app store

Well, I started the publication process a couple of weeks ago. Unfortunately, Apple Rejected it on the first attempt. I posted an issue in the app project where you have more information. I sent it again last week, so in the next few days we’ll know if it has been rejected again.

Meanwhile if you want to run it and you have the iOS development environment, the source code is available on GitHub.